Health at YOUR size

Ellen (not her real name) headed back to the gym on Super Bowl Sunday after a long hiatus during which she had gained considerable weight and become deconditioned.  She chose Super Bowl Sunday because it is a celebration of some of the country’s biggest athletes, like her favorite Patriots player, defensive tackle Vince Wilfork. 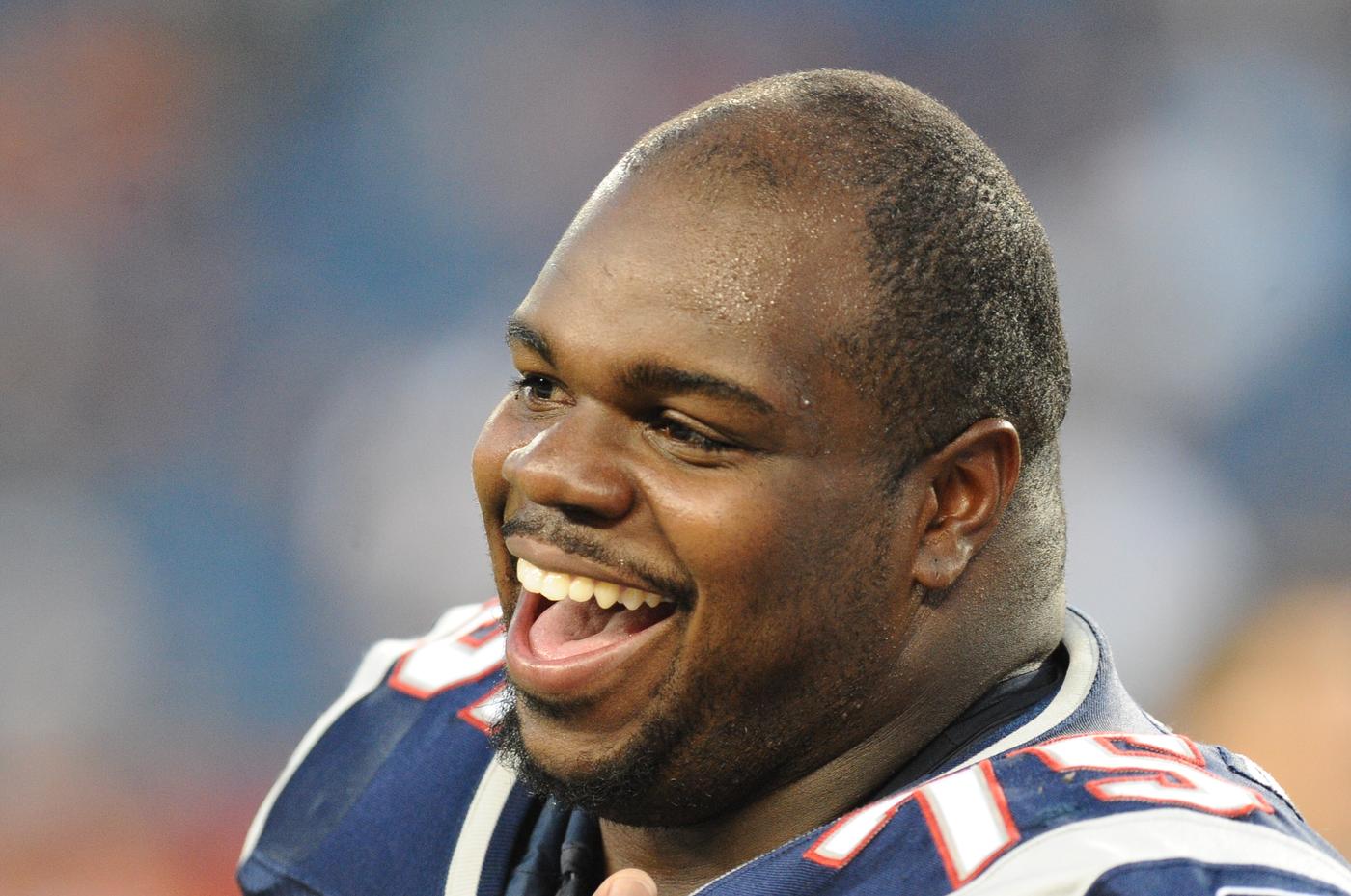 The Patriots’ Vince Wilfork: proof that a lean, hard body is not a requirement for health, athletic prowess, and a successful career using one’s body. (Photo courtesy Patriots.com)

“He inspires me.  If he can get his 325-lb body through NFL training with the Pats and be a force to be reckoned with in the Super Bowl, I can by-God get my own body to the gym and get myself fitter and stronger.”

Ellen is not lacking in positive fattitude.  This is encouraging.

As a personal trainer, I think it’s important to know one’s client as a person, so that I can tailor a program that will not only be helpful but will keep her (or him) motivated.  This includes current and prior medical conditions, nutrition, and activity levels. I also have found that Ellen’s story strikes a lot of familiar chords for many people. Perhaps it will for you as well.

Ellen is a middle-aged woman who grew up in a blue-collar household.  She did not suffer from food insecurity as a child.  She attended public schools and earned a college degree.  Her current medical condition is very good: metabolic panel and BP are normal, and she has no history of major illness.  Resting pulse is a little high, which is to be expected in someone who has been inactive for a long time.

Like many fat people, she has a long history of weight cycling., also known as yo-yo dieting. She started dieting in elementary school when her mother, who was also fat, began taking her to meetings of the unfortunately-named TOPS (Take Off Pounds Sensibly). She learned to count calories by placing 100 pennies in a cup, and moving one penny for every 10 calories to a second cup.  When your first cup is empty, your food has run out for the day.  This, her mother said, would help her grow up thin rather than chubby.

In pictures from her early childhood, Ellen is somewhat chubby.  She ran, rode her bike, swam, and took part in phys-ed classes.  In spite of being teased for her size by classmates, she played basketball in elementary school, but stopped all sports in middle school because she was convinced she was too fat to play on the “real” team.  At home, under her mother’s tutelage, she tried diet after diet, occasionally losing weight but then quickly regaining it.  By high-school graduation, the consequences of weight cycling were becoming more evident: she would probably have been classified as obese by a physician.

In addition to countless ineffective short-term diets, Ellen  lost 50 or more pounds three times — once during college, again in her late twenties, and a final time in her late thirties/early forties.  Each time she stopped dieting, all or most of the weight came back (sometimes more). By 2001, her weight was at an all-time high and she was beginning to have difficulty walking. She became short of breath and had chest pain with minimal activity.  She had episodes of heart palpitations while at rest.

“I felt like the best of my life was behind me, and I was going to be dead before long.”

At her highest weight, Ellen was also extremely unhappy in her home life.  When not at work, she stayed at home, because she took no pleasure in going out.  Her relationship ended in a tumultuous argument with her boyfriend on 9/11.

For the next several years, Ellen lived alone and focused her energies on emotional healing.  She found a new job where she was happier.  She joined a worship community that nurtured her spiritually.  She reconnected with family members.  Ellen built herself a support network of friends, family and co-workers that sustains her to this day.

In the first year after the breakup, she also lost 75 pounds without making any deliberate changes to her diet or activity level.  Once her weight began to fall, Ellen felt better and began walking for exercise and paying closer attention to her diet.  She began planning for a happy future — a thin future.

At the suggestion of a co-worker, Ellen went to a nutrition consultant who also happened to be a competitive bodybuilder.  He gave her an eating plan which, although not deficient in calories, tightly restricted the proportions of carbs, proteins and fats, and required her to write down the amount and time of every meal, snack, and calorie.  Her adherence to the eating plan was virtually perfect — so perfect in fact that it occupied her full attention, all day, every day.  When she wasn’t eating, sleeping, or working out, she was planning meals or cooking them, and became a font of food-related knowledge which she readily shared with her friends and family, whether they wanted the information or not.  At this point her obsession with food had become a full-blown eating disorder: orthorexia.

Likewise, her workouts were nearly perfect. She exercised faithfully, six days a week for two or more hours, often going from an hour-long water aerobics class to the gym where she worked out for another hour or more.  On days when she did not have water aerobics, she worked out on cardio machines at the gym, burning 800-plus calories at a time (“the same calories as a stick of butter,” as she would tell anyone who would listen).

When her weight loss plateaued, she worked harder in the gym and (predictably) sustained a series of injuries resulting from overtraining.  Discouraged with what she perceived as a lack of progress (she was still classified as “obese” by her doctor after all), her gym attendance flagged and she began to regain weight in spite of continuing to eat healthy foods.  As her weight snowballed, she became demoralized and stopped working out altogether.  She thought she would resume her workouts once the injuries healed, but six months turned into a year and more, and she became deconditioned. The shame of having failed yet again kept her away from the gym.

Fortunately, during her workout hiatus, Ellen also had some really positive things happen in her life.  She married her loving, supportive boyfriend; and she has learned a lot about the Health at Every Size (HAES) approach to fitness.  She came to understand  why diets don’t work, and why weight cycling in particular is harmful.

Ellen is just beginning to see herself not as a failure, but as someone who has been working very hard to improve her health, and using the wrong tools.  So she has decided to try something new: focusing on what good nutrition and exercise will do for her health today, not on some far-off hypothetical day when she finally becomes thin.

If this sounds like an approach you might find useful, join me on this blog as we talk about the power of positive steps, no matter what your size. Next time: Building an Effective, Appropriate Workout Plan

Strangers in a Gym

She is also fat.

If this flies in the face of what you think a personal trainer is, or what a fat person can or should be doing, I'd like to invite you to take a few moments to reconsider those assumptions. For an introduction to the revolutionary movement known as Health At Every Size® (HAES), click here.

As a fat personal trainer, she combines her knowledge of fitness training with a keen understanding of clients who are struggling with weight-related shame and judgment that may be haunting them from as far back as middle-school phys ed, and as recently as this morning.

In other words, she gets it.

She loves powerlifting, swimming, and (oddly enough) the elliptical.

Her mission in life is to spread the word that people of all sizes (INCLUDING YOU) are capable of improving their lives by feeding their bodies well and engaging in joyful movement.

You can starve a Saint Bernard, but you ain’t gonna turn it into a Greyhound.

And really, why would you want to? Saint Bernards are majestic, beautiful creatures. They are brave, dedicated, affectionate, highly resistant to cold and they save lives (unless you try to starve them, in which case their wonderful qualities cannot be realized).

Health At Every Size® and HAES are registered trademarks of the Association for Size Diversity and Health and used with permission.

Stuff My Lawyer Says I Have to Tell You

The exercise routines described in this blog are examples and should not be construed as specific advice. While it is hoped that you will find this blog informative and motivating, we at The Fat Personal Trainer recommend that your individual workout plan be designed in consultation with an appropriate professional. Find a size-friendly trainer, nutritionist or other help at the HAES Registry.